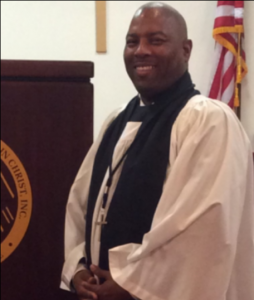 Elder Ronald Blanks, Sr. was born in Thomasville, AL to Johnny and Ealma Blanks. He is married to the lovely Missionary Sharolyn Blanks and has four children: Ronald Jr., Hannah, Myah, and Ronia Blanks.

Elder Blanks was called by God to go out and preach the gospel in October of 1996. He accepted his calling while being a member of True Holiness Pentecostal Church while assigned as a drill sergeant at Fort Sam Houston, TX. Elder Blanks was assigned as the youth minister until his reassignment to Walter Reed Army Medical Center. Shortly after Elder Blanks’ new assignment to Walter Reed Army Medical Center, he became a faithful member of Deliverance Tabernacle Church of God in Christ (COGIC) under the Pastor Superintendent Wayne M. Brooks, Sr. Elder Blanks has served in many capacities such as the Brotherhood President, Executive and Trustee Board, Pastor’s Aide President, and eventually became the Assistant Pastor. Elder Blanks was ordained as an Elder in the Church of God under Bishop Nevelle A. Coles of the Washington, DC Ecclesiastical Jurisdiction in August of 2008. Elder Blanks continues to be committed and dedicated to the calling that God has placed on his life. He continues to serve under Superintendent Wayne M. Brooks, Sr., where he has served within Deliverance Tabernacle COGIC ministry for over 16 years. In October 2012, Elder Blanks was appointed as the District Sunday School President of the Sheman Scott Howard District under Superintendent Wayne M. Brooks, Sr.

Elder Blanks’ favorite scripture is: “I will lift up mine eyes unto the hills, from whence cometh my help. My help cometh from the Lord, which made heaven and earth.” (Psalm 121:1-2). Elder Blanks heard the calling on his life in the year of 2013, but being committed to where God had placed him, he felt there was still more work for him to do there. So after wrestling with the Lord, he gave in and accepted the call of Pastor in May 2015.

While serving as the assistant pastor at Deliverance Tabernacle COGIC, he had the distinct pleasure and opportunity to be mentored by his Superintendent/Pastor Wayne M. Brooks, Sr. He will be forever grateful to Superintendent/Pastor Brooks for making sure that he was taught and trained in the way of holiness. Elder Blanks would be remiss if he did not thank his friend First Lady/Evangelist Vivian Kay Worthington Brooks for all of the phone calls, counseling sessions, and prayers over the years.